Aug 13, 2018 By Kristen Bonkoski Posted in The Archives Tagged with Family Cycling 6 Comments Yesterday we pulled into our driveway after a year on the road. Over twelve months, we visited more than 50 biking destinations around North America. Our route took us to the flowy trails of Copper Harbor, MI, the jungles of Ocala, FL, the paved paths of Bend, OR, and the bike park in Whistler, BC. Through it all, our son made the transition from a hesitant four-year-old to a confident, capable five-year-old. He pedaled more miles during our trip than most people bike all year.

The trip wasn’t just transformative for him, it was life changing for all three of us. For people who love bicycles, what could be better than riding one every single day? We went from stressed-out, city dwellers to fit, tan, and laid back voyagers. We also learned a lot about ourselves and the world we live in–far too much to ever fit into 1,000 words–but here are a few of our key takeaways from a year of riding.

Every time I open a bike magazine, I’m immediately drawn to stories of exotic adventure: road biking from Alaska to Argentina, mountain biking in New Zealand. The truth though is that you don’t have to go very far to experience amazing places. There are more miles of trails and mountain ranges and twisting country roads in North America than you could ever touch in this lifetime. Little towns you’ve never heard of have great trails hidden in their backyard. We spent a week in Lajitas, TX, nestled between Big Bend National Park and Big Bend State Park, and it felt like we were on another planet. If you want a great adventure, go find it. They are all around. Biking Brings Us Closer Together

Riding our bikes together nearly every day for a year, brought us closer together than I ever could have imagined. I thought we were a close-knit family before, but now we are inseparable. A good bike ride forces you to spend an hour or two or four with your riding partners. When we are at home, it is easy for me to retreat to the kitchen and my husband to his man cave, and my son to the backyard with the neighbor kids. On the trail, we talk about our hopes and dreams and fears and we laugh until it hurts. Biking has always been a central part of my relationship with my husband, but we lost that a bit during the baby and toddler years. On our trip, we not only rebuilt our marriage through biking, we also built an unbreakable bond with our son. 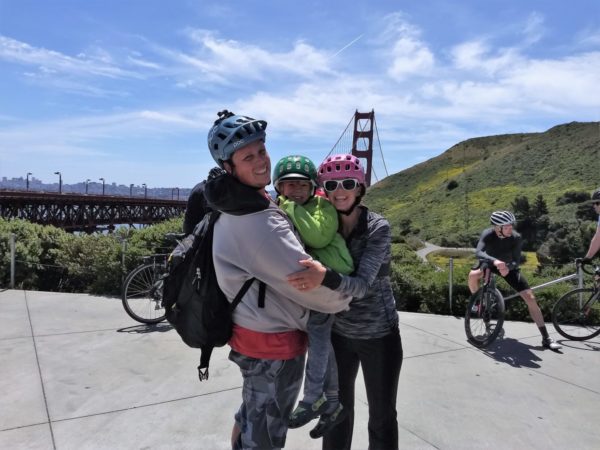 Before we left, everybody warned us that we would hate each other after a few weeks of hanging out 24/7 and living in a tiny trailer. They were right–and wrong. There were certainly moments where we wanted more space, where our truck broke down, and things didn’t go as planned. But that’s life. If you have a kid, you know: adventuring with children isn’t easy. There were moments where our son gave up on the side of the trail, and ones where my husband and I both blamed each other for picking the wrong route. We’d yell and cry and pretty much all hate each other. But then we’d keep on going and come to the top of a hill and watch the sunset together and we knew that those were the moments that counted. Conflict is okay as long as that it brings you closer together in the end.

Biking is More Fun When There Are Other Activities Mixed In

Biking just to bike is great when you’re 40, not so much when you’re 4. We learned early on that biking as a family is more fun when it’s used as a way to explore the world. You learn a lot about a new city when you create a tour of playgrounds. A mountain bike ride is more than just a mountain bike ride when there is a lake to swim in mid-way, and you can collect a lot of seashells when you’re cruising the beach on a bike. As adults, we can learn so much from kids. One of those lessons is this: turn off Strava and pay attention to what’s around you. I’ve always kind of rolled my eyes at people who say, “there’s no such thing as bad weather, just bad clothes.” As an outdoorsy kind of gal, I’ve spent my fair share of time huddled in a tent during a blizzard and let me tell you, 65 degrees and sunshine is a lot more enjoyable. Nonetheless, I discovered that the more time that we spent outside, the less the weather really mattered. We spent one chilly 34-degree day bundled up in coats and biking from mission to mission through San Antonio. The rest of Texas was hiding inside and we had the bike paths all to ourselves. It turns out that the real bummer is when you spend most of your week indoors only to escape on the weekend and encounter crummy weather. If you spend time outside each day, it’s all temporary and fluid and pretty darn bearable. For me, the biggest takeaway from our year was just how important being in nature is. Because we had three people living in a 20-foot trailer, we spent most of our time outside. I drank my coffee outside in the morning, we biked during the day, and we cooked and ate our dinner out of doors in the evening. For the first time in my life, I always knew what phase of the moon we were under. That might sound trifle, but it was amazingly life-affirming. We are so connected to the earth around us, and yet, in our modern lives, we are so detached. There are many ways to reconnect, but for me, a bicycle ride is an awfully good way of doing it.

Sizzling Strategies – Part 1: Timing is Everything

A tale of N. America’s 3 hi-end trailer brands & Why we’re closing out Croozer at 40% off