Tips from the Cycling Sloth

Jun 11, 2012 By Blues Cat Posted in The Archives Tagged with Commute by Bike 5 Comments

I’m the Lazy Bum mothers always warn their daughters against marrying. But in almost thirty years of marriage to Mrs. Cat, I have developed certain tactics for getting just enough done to satisfy the more industrious members of my family.

I am a Natural Master of Indolence, so it is important that I develop techniques equally masterful to accomplish things I really do want to do. I shall reveal some of these to all of you Padawans, in the hope that they may work for overcoming some of roadblocks you Lesser Bums face choosing the bike over the car for your morning commute. Think about something for a second: does anybody go through a conversation with themselves like, I’m driving the car to work tomorrow, so (A) it needs to have gas, (B) the engine needs to run, and (C) the tires need to have air in them?

Of course not, we put gas in the car when we’re driving around and either (1) we notice that the needle is hovering around the big “E” on the dashboard, or (2) the car starts to sputter and die and we say, OMG!  We’re out of gas!

Until one of those two things happen, we don’t even think about gas for the car. We also expect the car to start and run in the morning when we turn the key because it has a history of doing just that. Likewise, since most of our automobiles have a history of having air in the tires, we expect that to be the case in the morning, and I bet the majority of even the Anally Preparatory folks out there don’t walk around the car to look at the condition of the tires before they hop in and drive away.

Like many others, I just assume the readiness of the automobile to take me to work as a result of being aware of gauges on the dashboard and having an expectation based on what has happened many times before. What I need to do, then, is avoid having to say “I’m riding the bike to work tomorrow, so (A) all of my stuff has to be ready, (B) the bike has to work, and (C) the bike tires need to have air in them.”

Item B, for both automobiles and bicycles, is something that is a given for me. In the four years I have been back bike commuting I have never had one of my bicycles simply not work in the morning. I have had a dead battery in my car, and what that means is the bicycle is actually more reliable than the automobile. The only bicycling items I have to be concerned with are A and C.

Item A is the big one for me. Unlike Item A on the car list, there isn’t any gauge anywhere on the bike that will warn you that you don’t have all your gear together in order to ride. So that’s typically where my Super Sloth kicks in and I hop behind the wheel rather than on the two wheels. If I have to stop and pack even the most minor item I need for the day, I’m subject to the inner, whining voice which will talk me out of it. For that reason, prepping for the next morning’s commute starts the second I arrive at home that evening.

I tried leaving five days worth of clean clothes in the office on Mondays, and taking all the dirty clothes home with me on Fridays. By Thursday, my office had started to smell like a locker room. So I take a fresh change of clothes with me every morning, and bring back the dirty duds that night.

Right after I park the bike at the house, I take the large stuff sack out my right pannier, move to the laundry room and put the stinky stuff in the hamper, head to the bedroom to fill the stuff sack with clean clothes, and then it’s back out to the bike to put the stuff sack in the pannier. It’s one smooth motion from bike to laundry room to bedroom and then back to bike. I’m packed, and it isn’t any more work than laying out my work clothes for getting dressed after my shower.

The type of bag I use for all of my other work stuff (laptop, organizer, etc.) plays a huge role in making it easier to take the bicycle. I used to transfer everything from my nice leather briefcase to the left pannier on the rear rack of the bike. While this worked okay, it was still that dirty word of “work.” A better solution is having a briefcase which doubles as a pannier.

This means some sort of quick release system, because if using the bag on the bike isn’t as easy as tossing a briefcase into the back seat of the car, it’ll be too much work for me to use. I bought a Vaude Egger Commuter Pannier, but there are others such as the Ortlieb Office Bag Medium Plus.

Making a bag like this my regular briefcase not only takes some work out of preparing to ride, it also can provide a regular place for storing my briefcase: right on the rear rack of the bike. My commuter bikes are all parked in the house; they’re just too important to me to park outside in the weather. The secure area for the bikes provides an ideal, secure area for my briefcase.

Some items we carry on our person through the day. For men, this usually a cell phone, a wallet and keys; these are The Personals. I usually wear cargo shorts when I ride, so the secured pockets mean I can keep The Personals on my person. If the weather is cold, the bicycle tights do not provide those safe pockets, so in my briefcase/pannier I have established pockets for The Personals. When I get to work in the morning and clean up, I transfer The Personals to my pants pockets. 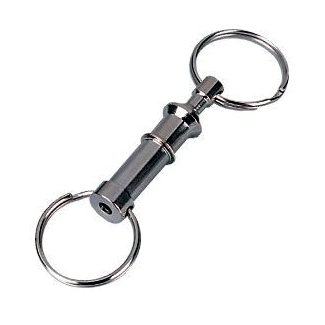 Speaking of keys and work, I even use my key chain as a tool for encouraging bike commuting. Years ago, I started using a two-part key chain; house and office keys are on one part and car keys are on the other. Originally, it was a matter of convenience, so I could run out, start the car in the morning to warm it up, separate the house/office key part, run back inside to collect my gear, and be able to lock the door to the house when I headed back out. I was also much more comfortable leaving just my car key with the valet rather than my whole set of office and home keys.

Two part key chains are also excellent for turning the tables on the whole bike versus car commute choice. In the evenings, I always separate the key chain and bury the car key part in my underwear drawer. In the morning, the Slovenly Slob part of me is forced to do more work in order to “choose” to drive the car. Brilliant, eh?

5. Maintenance the Night Before

Moving to Item C on the bike list, I always check the tires right after I bring the clean clothes back to the bike in the evening. Since I’m right there, in “maintenance mode,” I use that as an opportunity to squeeze the brake levers and do a quick visual on the bike. That’s it.

In the mornings, I simply perform a pinch test on the tires, check the zippers on all of the bags, confirm that The Personals are present, and I’m off!

7. I Don’t Preview My Plans

Last of all, I want to present an idea which, at face value, would seem to go against safety considerations: I do not tell anybody in the family whether I’m going to be taking the car or riding the bike to work. This seems all wrong, doesn’t it? I mean, isn’t it a basic given that somebody should know where you’re going, when you expect to arrive, and what time you’ll be headed back?

Look closely, and you’ll notice I’m not saying I never say where, when and what time, I’m really saying I don’t announce what my plans are up front, ahead of time. Not even to myself! If I do, my family and I will unconsciously conspire to keep me off my bike and in the car.

In the morning, I finish up my morning chores, grab my helmet and call out “Off to work, Honey!” It isn’t planned; it hasn’t been even thought about until that very moment. When I surprise everyone, even myself, with the idea of riding my bike to work, there is less chance that even I will sabotage the activity. The Cycling Sloth is caught off-guard and I’m enjoying a trip free of traffic jams and other commuter headaches.

5 thoughts on “Tips from the Cycling Sloth”