May 16, 2012 By Blues Cat Posted in The Archives Tagged with Commute by Bike 4 Comments

As I perused the Website of Revelate Designs, a silly little phrase kept echoing through my head:

That may sound silly, but I think it aptly describes the focus of the company’s product line. In addition to the standard seat and handlebar bags, Revelate also makes a creative line of bags which attach to the bike, in all those little areas of open space, without requiring extra racks or other hardware.

There’s the Gas Tank Frame Pack which attaches to the back of your handlebar stem riser and top tube, and the Jerrycan bag which Velcrosâ„¢ to the front of your seat stem and the top tube. The big daddy of the line is the Fatbike Frame Bag which fills the entire, triangular diamond formed by the top, down and seat tubes of a select line of bikes from Surley, Salsa and Fatback.

The Tangle Frame Pack hangs down from the top tube, is between four and six inches in height — depending on whether you get the small, medium or large — and it runs from the head tube all the way back to the seat tube. Revelate specs out the Tangle Frame Bag by having the customer measure the top tube of their bike. I wanted to make sure the bag would fit on my smallest bike, my Giant Yukon SE, which has a top tube length of 20 inches. They sent me the medium bag; 19.5 inches long by 4.5 inches high.

The Tangle Frame medium affixes to the head tube and seat tube with cambuckles, and to the top tube with Velcroâ„¢. And let me mention briefly the quality of that Velcroâ„¢: This ain’t no bargain basement stuff, folks. This is industrial quality Velcroâ„¢! 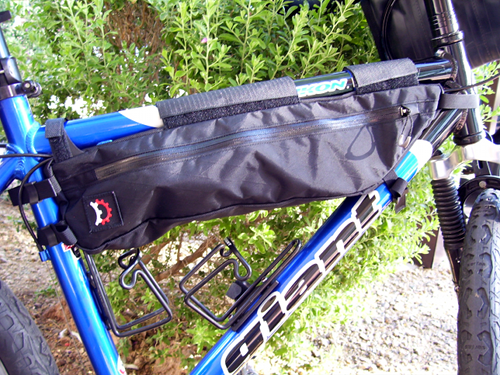 When I pulled the Tangle Frame out of the plastic shipping bag, I must have fought with it for about two minutes before I could get it open in order to put it on the Giant. This bag will not fall off your frame, even if you don’t hook it up to the head and seat tubes, and it might even prove to be a deterrent for would-be thieves figuring to pilfer it from your unattended bike.

The Tangle Frame has zippers which run almost the full length of the bag on either side. A nice touch is a water-resistant shield which consists of a split flap, covering the zipper tapes, which closes over the zipper teeth when the zipper is closed. The bag is divided lengthwise by a Denier fabric wall which is offset to the left side of the bag so it hangs down from the left edge of the top tube. This means the right side of the bag has the most room, with a two-inch-wide floor at the bottom. The interior walls of the bag are gray, the bag floor is black, and the divider wall is yellow, which means you’re not looking down into a featureless pit when the bag is open, but have a sort of 3D reference for finding your stuff in there when you’re zooming down the road.

Open the zipper on the left side and you have a flat pocket which is ideal for things like your smartphone, bike gloves and a nice, thin wallet. My wallet is a huge, hamburger of a thing, which means it goes over on the right side. No problem, though, because with a capacity of 275 cubic inches I could get the contents of two handlebar bags in there, along with something I’ve never been able to fit in any handlebar bag: a frame pump.

On smaller framed bikes like the Giant, the Tangle Frame will interfere with the usefulness of bottle cages mounted to the seat tube, but that isn’t a deal-breaker for me. The bottle cage attachment bosses on the Giant are mounted so high that a full-sized, 24oz bottle won’t fit under the top tube anyway. A loaded Tangle Frame also makes getting a large tumbler or water bottle out of the down tube cage of the Giant a bit tricky, but not impossible. (A sideloader bottle cage would make this easier.)

I moved the Tangle Frame over to my Specialized Hardrock for a real acid test. The top tube of the Hardrock is 21 inches long, so the medium bag should be a bit short. Not to worry, the bag fits perfectly. The cambuckle belts are plenty long enough to reach around that big frame. The top tube of the Hardrock is a little unique. It starts out at the head tube as this big one-and-a-half by three-inch rectangle, and morphs into a  one-and-a-half-inch diameter cylinder back at the seat tube. When I saw the Tangle Frame on the Revelate Website, I thought this might present a problem. Again, no worries; that Super Class of Velcroâ„¢ is also Super-Sized; there was plenty of it to wrap securely around the top tube.

The big framed Hardrock also provides lots of room underneath the Tangle Frame to access the bottle cages. Pedaling down the road, no problem with clearance between my knees even with the bag stuffed, and with the cell phone within easy reach on the left side, and the camera at close hand on the right side … I think this niche filler has found its niche on this bike.

Update: A photo in response to the question about knee-knocking. 4 thoughts on “The Tangle Frame Bag: A Top Tube Groove”

The Day Before Bike to Work Day