Resolutions Great and Small for 2011

Jan 1, 2011 By Ted Johnson Posted in The Archives Tagged with Commute by Bike 12 Comments

I sent out requests (kind of at the last minute) to the writers who make Commute by Bike a great read. I asked for their New Years Resolutions for 2011.

These are the ones that came back in time. Please add your resolutions in the comments. Looking forward into 2011, a bike commuting project that I’m quite inspired to get rolling with is putting together a project bike that I’m currently calling the “Jump On Your Bike and GO! Bike”. Here is my initial description of the project that I wrote back in September at our shop’s blog, The www.CampfireCycling.com Blog.

Recently, I've been contemplating how to make the bike as easy as a choice for quick trips across town as a car is. Even as a lifelong cyclist, I still find myself constantly dealing with small issues with my bicycle. In the last month, several of the things that have slowed me down were a flat tire, a squeaky drive train and a bolt that fell out of my bike rack. While I'm completely capable of sorting out these issues, I've been thinking about how these seemingly minor issues can completely disable many from wanting to ride their bikes. On the other side of the spectrum, I've been thinking about how (environmental, cost and health factors aside) in general there are a wide variety of reasons that it is often much more convenient to get in the car and go as compared to heading out on by bike. Almost any car has the following: head and taillights, one-key security for the car and your stuff, the ability to keep road grime off of you and generally speaking solid road worthiness.

With all this in mind, I've been thinking about piecing together a bicycle that is a one-key, “Jump On Your Bike and GO! Bike”. This bike would be extremely durable, reliable and easy-to-use for standard situations. Essentially, I would like to put together the Toyota Corolla of bikes. It will probably have an internal gear hub, big heavy reliable wheels, front and rear locking trunks, built in lights and solid built in racks and fenders. And of course, the bike will have an electric system both to make it more jump-in-and-go ready and also to compensate for it's tough, heavy-duty, heavy parts. Ideally, the same key that locked the bikes built in lock would lock the trunks.

Soooo, with this in mind, I plan on building this idea into my commuting bicycle in the year to come. To get started, I will be looking for a nice electric bike to build the concept around. I intend on testing out a variety of bicycle accessories and parts to get as close to proving the concept with available products. After going through this initial testing phase I’ll be working with our Metal Fab Expert, Stuart Henderson, piecing together some conceptual products that fill in the gaps where existing products aren’t quite right for the project.

Look for a variety of Commute By Bike posts in the year to come focusing on the specifics of the project as well as discussions about the bicycle industry and a variety of commuter bicycles viewed through the spectrum of the project. My post fully introducing the project should be out in January or February at the latest. One of my biggest challenges as a bike commuter is riding somewhere when the weather is less than “favorable.”   Now let me frame this a bit. I live in Tucson, AZ, where we have 300-some odd days of sunshine. The desert climate is quite pleasant most of the year, although it does get pretty toasty in the summer and early fall months. However, as a self-proclaimed desert rat, I find it very difficult to get on my bike when the weather turns, well… wet. Now granted, it isn’t all that often that the weather here is “wet,” and sometimes, all you have to do is wait 20 minutes for a crazy storm to blow over. Nonetheless, I find it extremely difficult to motivate myself to ride to work or school when it’s raining. So for 2011, I resolve to wear my rain pants and jacket and ride when it’s well, wet in the desert. And more often than not, every time I actually do ride in the rain, I rather enjoy myself.

Second, I resolve to always have my nice bike lights with me anytime I suspect I might be riding somewhere at night. There is nothing worse than riding home with dull, dim bike lights, but as a student who is often on campus for long hours, sometimes I find myself at school, with a four mile commute home, and no bright, flashy, attention-getting lights. And there is nothing I like less as a bike commuter than calling for a ride or feeling vulnerable with my not-so-nice bike lights all the way home. So, I resolve to make sure I always bring my nice lights with me, even if I think I’ll be home before dark, just in case campus sucks me in for some reason.

Third, I resolve to love the wind. Or at least try. 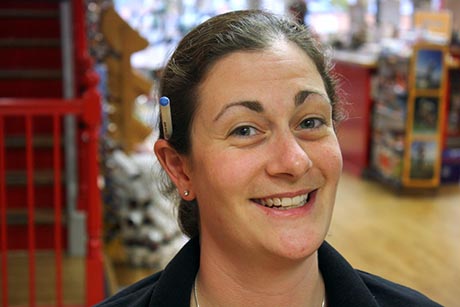 Simple: Use my bike more and encourage others to do the same.

I am surrounded by bikes, all of the time. Literally. I have four of my own at home and to get to my office, I have to walk through two showrooms stocked floor to ceiling with bikes. I read and write about bikes at work and then I read and write about bikes for CbB. I love bikes, but I could spend more time riding them. So that’s it: ride my bike more. Give in to the temptation to avoid riding because the weather is gross or because I’m feeling lazy less often. Use my bike to go grocery shopping, even when I know that I have heavy stuff to cart home. Participate in more group rides, even when my free time is limited. I’ve never regretted being on my bike once I’m out there, and I need to do a better job of reminding myself of that fact when I’m making my transportation and recreation decisions everyday.

My other goal is to continue to help more people learn about cycling and to be comfortable and excited about riding more often. I work for a very community-focused independent bicycle retailer in the DC Metro area, and one of the most fulfilling parts of my job is getting more people on bikes for events and for community activities (we actually have a bike share program at our newest location, and we use the bike fleet to put on tons of community rides). Whether it is people that I’ve never met before or friends that I’ve coerced into joining one of our rides, there is nothing more satisfying than seeing someone grinning ear to ear, realizing that cycling is fun and really not as hard to do in and around the city as he or she thought. And, of course, I’ll continue to contribute to Commute by Bike, and hopefully we’ll reach and inspire new and veteran cyclists alike in 2011. I’m all about the bike commute, and hating on driving. But the hypocritical truth is that my wife probably spends a couple of extra hours a week in her car running around doing the stuff that I can’t yet do on my bike. Her extra driving negates all of my non-driving. I’m a parasite cyclist. That’s going to end in 2011.

I’m going to eliminate as many of the reasons as I can that require my wife to spend time in a car, beginning with the grocery shopping. I may start with some shopping panniers, but ultimately I may have to go for a long-tail bike, or a bike cargo trailer.

In addition, I intend to keep Commute by Bike both entertaining and relevant. I will build on this foundation and firmly establish this site as the definitive, authoritative, undisputed resource for bike commuters.