Nov 6, 2009 By Arleigh Jenkins Posted in The Archives Tagged with Commute by Bike

Having ridden the Civia Loring for a little over two weeks as my daily commuter I’m ready to give all of you my initial thoughts about this little green machine.   For background on parts or build questions, check out our Introduction article from last week. 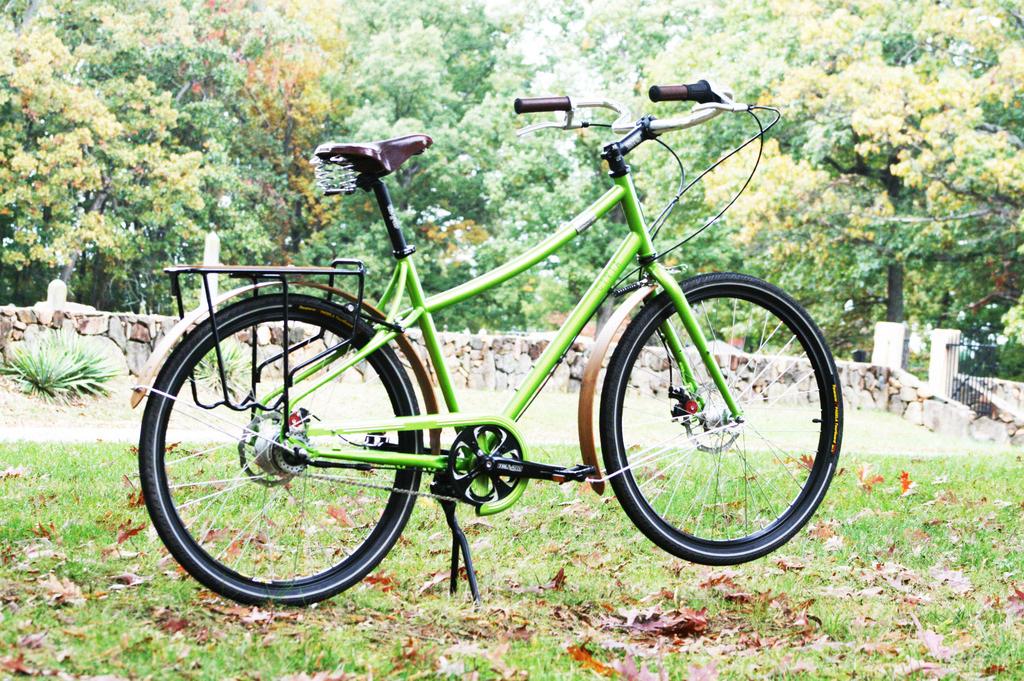 This bike has a true city riding feel to it.   Getting out the saddle with the front end loaded takes some practice and I still haven’t mastered track standing with a load up front.   When riding you utilize your gears and spin instead of mashing.   Due to the geometry I don’t believe the bike was meant to be a very quick ride.   Saying that, after 2 weeks of constant use I have relearned my pedaling technique and I’m getting to work much faster than the first few days I was commuting with the Loring.

The basket is very different for me as I’ve never had a true front load bicycle.   I’ve put front baskets or handlebars on the bike, but never something this large, nor something that is designed for the bike.   I really enjoy having my belongs and laptop in front of me during the commute.   The ability to quickly stash my scarf or gloves in my bag up front instead of my pockets is help ful as well.

Since installing the front basket I haven’t been utilizing the rear rack for panniers or any type of bag.   The few times I used my Minnehaha basic pannier it clipped my heels and I couldn’t push the bag back far enough due to the tabs on the pannier.

One last thing to mention is the Brooks saddle that came with the bike.   I still haven’t narrowed down how the saddle will suit me, or the exact placement it should be at.   Part of that is the fact I am a female and the front of a Brooks can be very painful if hitting the wrong spot..   It is said to take months to break in a Brooks saddle, as this is a review bike I don’t have that ability.

Overall Look and Personality of the Civia Loring

When you go look at the Civia website, you are wow’d by the look and function that the website offers and that translates into their bikes as well.   As you can see on each of their pages of bike description and prices, these bikes aren’t going to be on the low end.   Every detail and function has been thought through, with some extra “flair” and personality added to the bike.

Some of the functional pieces of the bike include :

The front light mount under the rack.   I really like this feature as it shines the light across the road compared to how it shines down at the road when on your handlebars.

A U-Lock holder built into the front basket. This weekend I plan on trying this out when I ride down to a neighboring town for coffee on Sunday.

Bamboo Fenders and Rack Inlays are very eye catching.   But I think they also add a decent $ to the cost of the bike.

A Few Final Thoughts on the Civia Loring

The cost of this bike is daunting to many, $1400 is a large chunk of change, but I think this bike could easily replace a car if you are living in the right area.   I wouldn’t want to commute on the bike 20+ miles a day due to the positioning, but I think the bike is very comfortable and steady to zip around town and run errands.   Soon, I will ride it greater distances to test out what is doable.   Many people are caught by this bike and its features as they should be.   This bike is a looker and a small piece of artwork.

There is still a few more weeks of riding this bike before I decide one way or another on my final thoughts, but for now I do enjoy riding the bike back and forth.   I’m not sure I would want to encounter strong traffic or heavy hills with the ride.