Commuting 101: Make Them Hear You

Jun 11, 2008 By Warren Tobaben Posted in The Archives Tagged with Commute by Bike

Even a fool is thought wise if he keeps silent, and discerning if he holds his tongue.
Proverbs 17:27-28 (NIV)

…Unless he or she is a cyclist…

Children should be seen and not heard.

…Unless they’re on a bike. Then they should be both…

This is probably more applicable for those of you who ride on bike/hike paths than for those of you who only ride in traffic. In traffic, being visible is paramount. You are riding with the flow of traffic (aren’t you?). More people are passing you than you are passing — unless traffic is at a stand still, in which case they may not be able to hear you anyway. Still, being seen AND heard is the wise way to travel.

With the kids out of school for the summer, I’ve recently taken to riding the long way to work. Rather than the straight shot of 0.7 miles of traffic and 3 miles of bike path, I’m riding the 0.7 miles in traffic and 22 miles of bike path. That means I have the opportunity to encounter more than 7 times as many pedestrians and cyclists, most of which are using the center of the path. I take pride in the stealthiness of my bikes, but that means the people I’m coming up behind don’t know I’m there. So, I make have to make some noise. 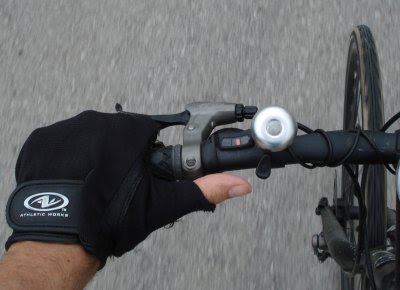 My bell is small, cheap and extremely effective. I start ringing well in advance of passing so that people have a chance to turn around and see me and make a decision as to what they’re going to do. Let’s face it, most pedestrians are going to react in the same way that squirrels and chipmunks do; they’ll start going one way and turn suddenly to go the other way, stop in the middle for a moment and then go a completely unexpected direction. Fine. Let them do this long before you get there.

My little bell has even caught the attention of a guy running a weed-whacker. The down side to using a bell like this one is that it just won’t register with some people. My favorite examples from the last couple weeks are the guy who thought he had dropped some change and the woman who thought her cell phone was ringing. Again, the more time you give people to react, the better.

Be it electric buzzer, an air-powered semi horn or a horn like Harpo Marx used, you’ll want to be sure you use it well in advance for the same reasons listed above.

No bell, no horn, no problem. Feel free to yell loud enough to make yourself heard, just be polite. If I am on a bike without a bell, or if I don’t have enough time to get to it, I yell “BIKE!” Doesn’t get more clear than that. Even when I use my bell I say something when I get right on top of people. “Good morning,” “On your left,” “Nice day,” “There’s one more bike behind me.” Spread the love people.

There will be times that none of the above will be of much help. There have been several parents out walking or riding with young kids; they won’t know what to do. Easy solution: make yourself heard, make sure they see you and then slow down so they can get their brood pulled together. They’re frustrated enough, so I say “Sorry” as I roll slowly by and let them relax a bit, or if they apologize I’ll just smile and say “No problem.” And it isn’t a problem. We’re all out there to enjoy the path and there are enough people on bikes who’ll just blow past them that they’ll be glad someone took the time to give them a chance to figure things out.

You’ll be bound to run into critters with more than two legs. Sometimes a bell works on animals. Sometimes a horn works. Sometimes yelling at animals will be enough to get them to move out of harms way. Most times, the above methods won’t do anything but make the little ones run in circles and the big ones brace for an onslaught. I’ve stumbled on to a method that works for me most of the time. If you’ve ever watched the Dog Whisperer on the National Geographic Channel you will know what I’m talking about. “PSSSSST!” Take a breath, purse your lips and let it rip through your teeth. PSSSSST! has worked for me in shooing off squirrels, chipmunks, rabbits, deer, woodchucks, beaver, bobcats, coyotes, dogs, cats, various birds and some teenagers. The only thing making this noise hasn’t helped me with are bucks during mating season and snakes. Snakes will probably feel the vibrations on the path and move off on their own; rutting bucks don’t have the ability to think so use your best judgment.

How about you? What do you do to make yourself heard?

When $5 in the tank doesn't cut it