May 26, 2008 By Warren Tobaben Posted in The Archives Tagged with Commute by Bike

Recent changes to my routes have meant more hilly terrain during my rides. During this time I’ve used gear combinations which I have never used before. I should say that I never dared use before.

For some reason, over the last few decades I’ve come to think of using higher gears as the manly choice. Heaven forbid someone catch me slipping down to “granny gears.” Somehow, in my mind, I settled upon the idea that higher gears meant a better workout and lower gears were the wimpy way out. One particular hill has changed all of that.

The stretch of road in question doesn’t look that impressive on a map, it is only 0.3 miles long. The paradigm shift came with the fact that less than a half mile uphill with a 29% grade isn’t so easy of a ride in higher gears. My first trip up that hill found me set in my ways and struggling to muscle out the climb. It wasn’t fun. During my second trip I down shifted and remember my inner monologue going something like “well, that’s why they made those gears… I made it to the top of the hill quicker and with, seemingly, less effort. Sure, I was pedaling like a mad man, but my speedometer showed an increase of 1.5 MPH over the previous day’s hammer-fest. Since that trip I’ve taken to dropping down to even lower gears and hills don’t seem so daunting anymore.

Seeking to justify this change in attitude, I harnessed the power of the internet and searched for “Bicycle RPM Gears Fat Strength” and came up with some very interesting information. According to this wonderful article at Active.com, “Why fast pedaling makes cyclists more efficient,” higher pedaling speeds are more economical and burn more fat. High pedaling rates also preserve glycogen in fast-twitch muscle fibers, meaning more energy available during the closing moments of a race.

In one case the cyclists pedaled their bikes at 50 revolutions per minute (rpm) while using a high gear. In the second case, the athletes pedaled in a low gear at 100 rpm. The athletes were traveling at identical speeds in the two instances, so their leg-muscle contractions were quite forceful at 50 rpm and moderate — but more frequent — at 100 rpm.

As it turned out, the athletes’ oxygen consumption rates were nearly identical in the two cases, and heart and breathing rates, total rate of power production, and blood lactate levels were also similar.

However, athletes broke down the carbohydrate in their muscles at a greater rate when the 50 rpm strategy was used, while the 100 rpm cadence produced a greater reliance on fat.

And then there’s Lance. The Wikipedia entry on Lance Armstrong mentions his riding style.

Armstrong has a low lactate threshold and can maintain a higher cadence (often 120 rpm) in a lower gear than his competitors, most noticeably in the time trials. This style is in direct contrast to previous champions (such as Jan Ullrich and Greg LeMond) who used a high gear and great strength to win time trials. It is believed that a high cadence results in less fatigue in the leg muscles than a lower cadence requiring more severe leg muscle contractions. Ultimately the cardiovascular system is worked to a greater extent with a high cadence than with a lower, more muscular cadence. Because the leg muscles are taxed less with a high cadence pedaling style, they recover faster, and the efforts can be sustained for longer periods of time. Armstrong dedicated a significant portion of his training to developing and maintaining a high cadence style.

So there it is, I’ve embraced hill climbing and do my best to maintain my typical average MPH while using a lower gear. I can’t say that I’ve noticed a significant difference, but I’m enjoying hills more. And … one thing to keep in mind is that one of the benefits of getting to the top of a really nasty hill is riding down the other side. 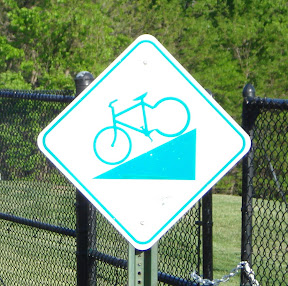 J&B Importers pays their employees to bike to work