Dec 7, 2006 By Nick James Posted in The Archives Tagged with Commute by Bike

So, on Tuesday I got the rear wheel with fixed hub, and in all the excitement, I forgot to document the switch! Well, long story short, I put the tube and tire on the new wheel, removed the derailleur, shifter, rear brake and corresponding lever. So, this is what the chaindrive looks like now: 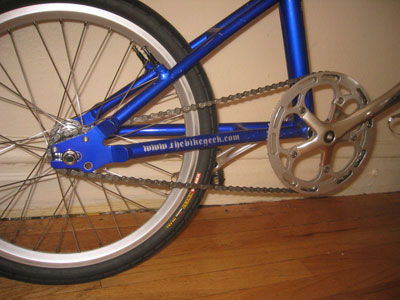 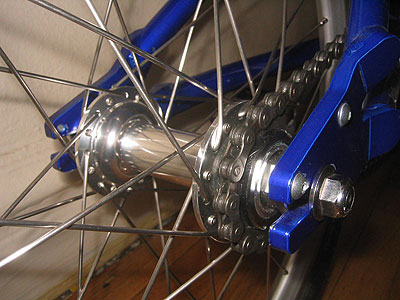 Nice, right? So, I still hate the handlebars, especially now that I’ve taken off the rear brake and shifter. I think they’re too wide, and the baby grip where the shifter went is now way too small. See, look: 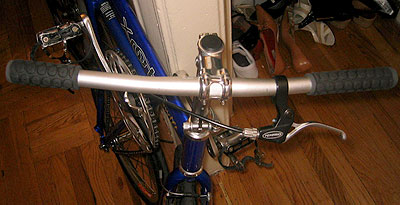 Ew! So I ordered some Oury grips, in bright freakin’ orange:

And used my pipe cutter to shorten the bars to a new total length of about 39cm.

Once I’d cut both sides, I installed the new grips, and replaced the MTN lever with a little cross lever that sits closer to the stem. 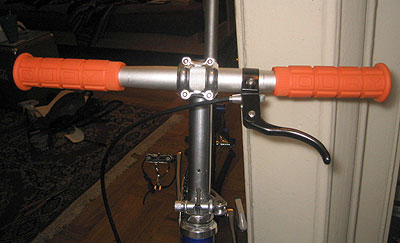 And, the body shot: 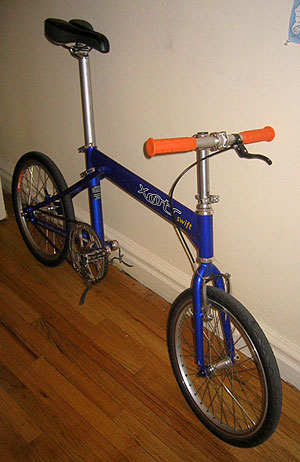 Next, I’ll be ditching that grandma saddle for something a little more my style. I’ve also ordered bolts to replace two of the quick release levers that allow the bike to fold the way it does. As is, any jerk on the street could steal my seatpost, saddle and handlebars without much effort. With bolts, I’ll be able to lock the bike up on the street.