May 27, 2006 By RL Policar Posted in The Archives Tagged with Commute by Bike 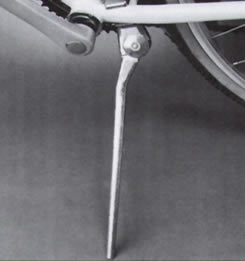 Today Priscilla and I were arguing back and forth about bicycles and kickstands. My deal was that I don’t think bikes need kickstands because of a few reasons:
Here argument:
AYE! I just don’t like them, I think they make the bike look like a sissy. But for her, its a matter of convenience, especially when she gets to her office and has to fumble around to get her keys and lock out of the bag and to open doors to the building…..
So we called Scott Finch of RPM Cyclery to see if he would be on my side….Dangit! The dude was on Priscilla’s side! All he said was…”its a matter of convenience, if she wants one, get one for her.” She even threatened to go down to RPM Cyclery and have Scott install a kickstand for her.
However, for the sake not arguing, and the fact that my reasons were vain in nature, I figured I’d give in and install one for her….
Here’s the Ibex Trophy 770….with a kickstand….